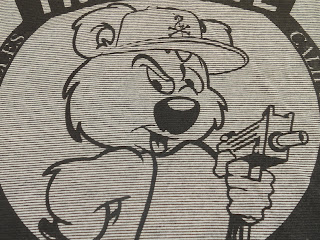 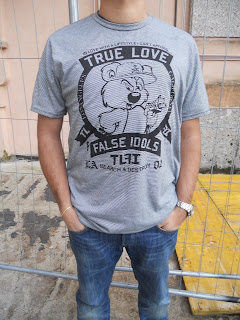 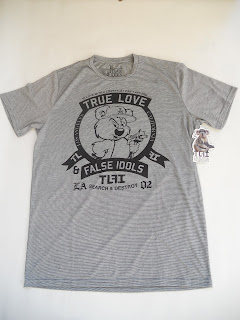 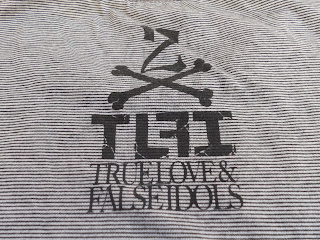 Out with the old and in with the new was the motto, if I’m not wrong. Here I am with the newest kid on the urban block. TLFI stands for True Love & False Idols. It’s so pleasant to begin the new year with something that sounds like my commitment: my love for this urban world is as real as the sun in the sky and false idols are around us ready to be unmasked by The Maxiemillion fine inspections. I’m glad to introduce you Reggie. This hostile yet funny character is a koala that instead of eating eucalyptus leaves, prefers to eat suckers, uninspired clothing companies and people without sense of humour in general. Reggie is resident on this tee called Reggie 4.0. Beside having an uzi, he has friends like Alex 2 Tone and producer extraordinaire Scoop Deville and they both play an important role in his attidude. He has underground kings as friends, that’s why he’s so happy and confident: the “Get busy committee” is a guarantee againts dull moments and this is a scenario where Reggie fits naturally. Not so new in the industry (TLFI started in 2005), this company “in love with a lifestyle that I can’t afford” recently found a new home at La Jolla group. Ok, I’m getting too educational, you are getting bored and you miss some of that good ole funny stuff and some insider info. Scoop Deville is none else than the son of West Coast OG Kid Frost that later dropped the “kid” part to be Frost forever. You weren’t able to recognize in 1990 what gangsta sh*t was? That’s why you never heard “La Raza”, the timeless Latino anthem. That was the “funny stuff” part, but what about the “insider info”? I’ve seen something that was simply too hot for my camera. Think about your hoodie and your windbreaker. Don’t they have a string that lately everybody lately is trying to build on? Makin it thick and wide as a shoelace or adding something at the ends? What’s next is a couple of earpieces at the ends of said string of a few TLFI items. Yes, they are linked to a jack that is situated in your pocket, ready to be connected to your mp3 reader. No, you don’t have to stink because you can’t wash your earpieces, they are washing machine proof. Don’t say Reggie that I told you anyway, it’s still an industry secret. I don’t want him to spray his uzi on me.