Home
Events
“I spark the lah, but don’t fuck with speed or trees with seeds/Quasimoto crew, we get keyed” (Lord Quas) 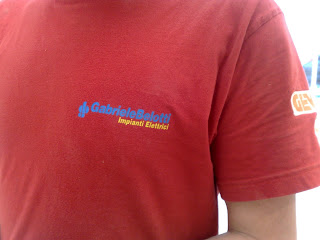 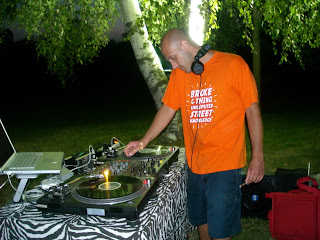 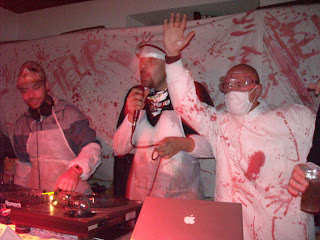 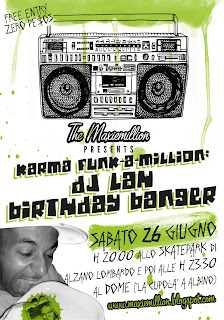 Ha ha ha ha haaaa. For a second you thought that I was reviewing this electrician tee shirt, do you? The thing is a joke. My homeboy dj Lah is a friend before a dj, for me. A real one. One you can count on. Think about when I saw this electrician wearing a work tee shirt with the real name of dj Lah: Gabriele Belotti. I laughed histerically. You’re already familiar with Lah aka Lahmillion (he’s family, hence he’s got the family name) probably. If you don’t here we have his micro “this or that” interview from yesterday. Together we talk about beats, rhymes and life like we were A Tribe called Quest. We share common ground for all things hip hop. Then if it’s punk or metal or old rock it’s me, if it’s funky, house or club music in general it’s him. Basically if we are together we’re a walking music encyclopedia. Music makes us winners in this world that wants us to lose. The program for Saturday June 26th is something never seen before. Why to throw a party when we can have a marathon?! Lah will be in charge of the one and twos at this skateboard contest. I’ll be in charge of the mic, cracking jokes at skaters and encouraging the youngsters. Those guys from Bazsnow put together a sick area close to the park with a wall for free climbing, some fake snow plastic slide and a bar where you can satisfy your needs. After the contest is done we can all meet around a table to eat at Dome (commonly known as “La Cupola”) where we can stay and not to worry about a thing. The place also has a music area, beside the pizzeria, where the closest friends of Lah will spin for him while he enjoys the festivities and he celebrates as he should. Who are these friends? We’re talking about Capitano Nema, Jojo Cagliostrini and Rocco Morning Glory. I guarantee good times in the name of Karma Funk-a-million. Did I ever lie to you?

Get down: @sprayground got the crown! The buzz aro

When I started balling I was young, kinda like Pos

With its retro impact, @diadoraofficial N902 S is

What do you know about a printed photo? This shot

@etnies wants you to stay hydrated with the proper

Getting crazy with a limp wrist on a @djkennydope

At our local spot around 1990 someone brought a co

It’s getting chilly but @iriedailyberlin will sa

That time I went to Brescia to shoot some photos w