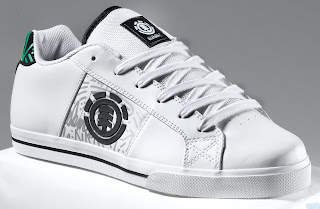 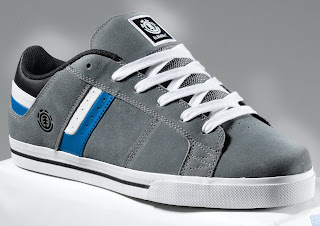 I may share with you some infos that are quite confidential here. Why Element has his line of shoes, beside the fine manufacturing of the best selling line of clothing and their endless line of skateboard decks? Because at a point they tried to buy DVS company and the answer has been no. Maybe they just saved their money in this way, because Element doesn’t suffer of any image problem it seems and their shoes are often seen around (at least around here). In case you don’t know, people gets influenced a lot by logos and their little friendly tree is appealing to a lot of skaters. Recently even the grandmaster of clean style and effortless power known as Mark Appleyard joined Element ranks. Apples don’t fall far from the tree, says his new pro deck. Let’s not fall far from the kicks, since this is what we’re here for today: give a look to these two members of Element sneakers family. Winston in white and black (K-Town) is what we have on top and Billings 2 in grey is the sneaker below. According to the rule that less is more once again, what Johnny Schillereff company came out with are two simple and functional skate shoes. Following the global trend of vulcanized soles, these two kicks in my eyes are for two different utilizations: the white Winston is good to go out with when walking, while the Billings 2 seems ready to come in contact often with the grip tape of your deck. Why I say so? Any skateboard ripper knows that suede grips way better than leather. But anyway, let’s not forget that the 90% of skate gear buyers are not actual skaters so we have the double combination of products here that may appeal to any potential skate shop friend. While I write this my mind keeps going to the last clip I have seen of Darrell Stanton, the tall member of the pro squadroon that endorses these skate shoes. I simply got love for him because he’s funny. But his skating will make you drop your jaw. A good friend with the godfather of street skating aka Mark Gonzales, he probably had his immagination sparked by hangin around Mark. His skating speaks for himself if you give a look to Trio, the last video part that he dropped. 360 Cannonball? No big deal. His skating stands out in the crowd and it’s no coincidence that even the above kicks sent in by Funnel srl are a flavour of their own. Shred til you’re dead!