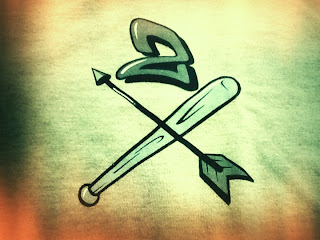 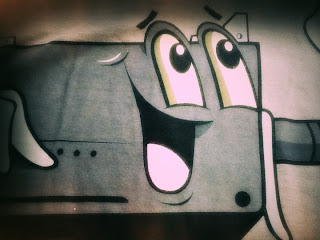 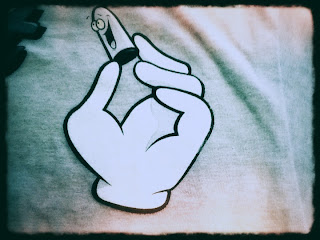 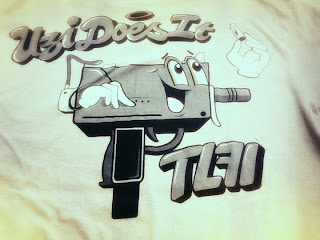 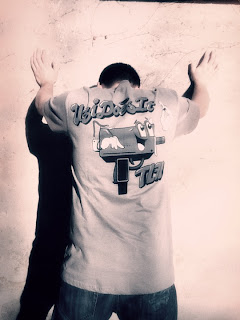 You know how it goes, once you start something sweet, you don’t feel like sayin’ “enough now!” anytime soon, huh?! That’s what I thought the other day at All In shop. I was there to say hi to my friends and the environment and the vibe was perfect for some shooting of products. It happened that Luca I dropped at The Maxiemillion headquarters the day before an exclusive t-shirt from True Love False Idols called “Uzi Patrol”. Once I was at All In I started shooting with my camera but I also gave a shot to my iPad and after I came home the idea start to grow on me: let’s put nothing but iPad pictures on the blog. Uzi Patrol is part of next collection dropping in summer of this legendary Angeleno brand that has 2 Tone as the graphic backbone. You may have seen his name around these days since he directed that Kid Sister video “Gucci Rag Top remix” with a bunch of TLFI gear all over it. What is is my hands today is a graphic reference to a king of LA gangsta rap. Once again, here on The Maxiemillion, let’s give a warm round of applause to Eazy E. I mentioned him when we talked about that cap that says Eazy duz it. Everything goes Digital Underground here: same song. “Uzi does it” it’s a wordplay that revolves around that epic joint dropped in 1988, recently turned into a Get Busy Committee anthem that has a title formed by those three words. 2 Tone is an old school cat that, like the man that is typing this now, fell in love with that era to a point to give hommage with his drawings every time possible and the same goes for that hip hop crew commonly known as GBC. Due to the violent potential of an Uzi machine gun, the idea here is quite evident: let’s turn a fire arm in a fictional comic character. Hence the gloves à la Disney, slightly reminiscing of that successful Crooks & Castles design called Air Guns. Mario L from All In (even if they don’t sell TLFI), has been so kind to recognize that this t shirt is fire and he did the model thing for a minute just to show you how dope is this design that will be out in a few months. This is an unbelievably fresh concept and I am seriously tempted to give to it the award “The Maxiemillion item of the year” but since all the wine from Xmas party is still in effect, I kindly ask you not to give me an anti doping treatment, take my word for it, ok?!

“Don’t hate the player, hate the game” (Too

I am happy to work behind the scenes for the commu