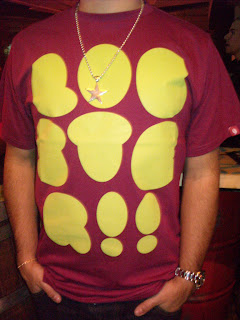 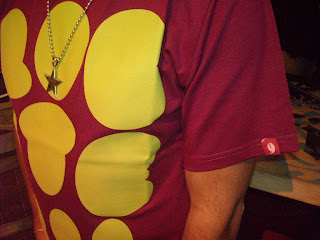 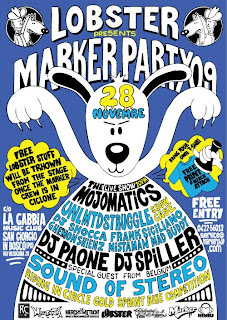 It’s hard being me. Born as a Virgo on Sept 22nd, I have developed an extremely picky character with attention to detail that sometimes turns into a struggle with myself. What I heard around about Lobster these days is not clear anymore to me. I thought it was a graff clothing company because Cento is behind it. Then all of a sudden I got informed that Dany Fenili and Francesco Marconato are on the skate program, so this means that this brand may also be considered a skate clothing company. Time passed and then the big boss Jeppy S invited me to the Markershop party as I told you already. Everybody and their cousin will be there, so you can’t go half steppin’. No fake moves allowed. In order to be sure then that Lobster may also be considered as a party clothing company, I came up with the plan: put together a party to test if the gear is good for the job, so I can rock Lobster gear there. It took me time, I had to contact the homies at Damn!, put together the second instalment of the party of the blog you’re reading now and get Jeppy on Skype and tell him I needed his support for the test. He agreed and sent me gear and stickers. The moment came and I had to get ready for it: checked my kit for the night and it was proper. Time to go and test if this tee shirt from Lobster can support me properly during my partytime. Matched like it deserves with my 12grain 59fifty, the t shirt passed the test. I took pics with chicks, got free drinks from the bartender, banged my head to the dopest joints ever and even that “bit of fresh air” on the smokers balcony felt alright. Not satisfied with this, I also thought that I should take pics of this tee, instead of doing it in a clean and aseptic environment, on the test field: the party. That’s why instead of a bright background you have soft toned colors, but the colors of the tee itself stand out in any condition! The test is passed. I’ll see y’all at Markershop party in two saturdays to see if I can even do better than this test.