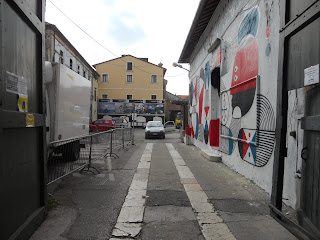 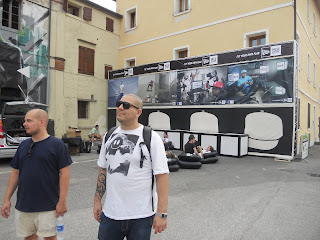 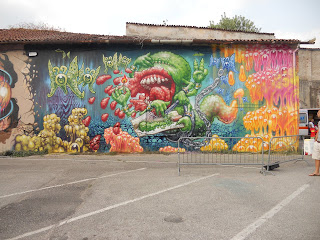 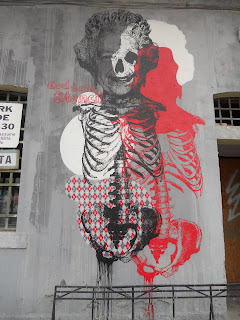 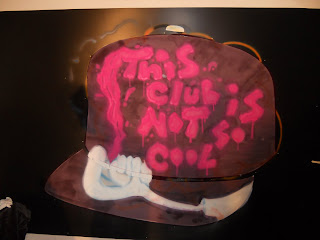 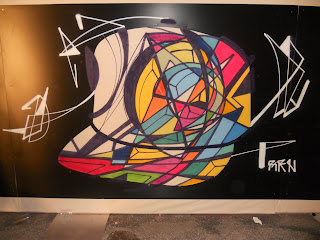 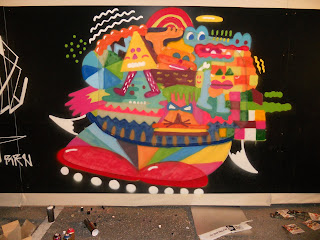 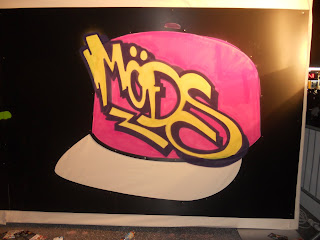 You should all know Move’s own Fabio L by now. He rocks black sunglasses in the second picture, just in case you don’t know him yet. One of the first supporters of this blog, Fabio told me recently that this event called Infart grew up in numbers, now it’s huge and it worths a visit. Sweet. Together with him, Marc Roc 2real and other Verona heads we formed a team and we spent the weekend there. To give you a taste about what happened you have to close your eyes and imagine like my name was John Lennon. A little city in the north of Italy, more close to Venice than to Milan. Hystorical town full of monuments, squares and nice Italian architecture in general, home of Grappa Nardini (a famous brand of a clear liquor that you usually drink in small quantities at the end of a dinner, after the coffee or instead of it), close to beautiful mountains. Nice scenario for sure. Now keep imagining in this context a huge court where you can let aerosol artists espress themselves freely at only one condition: they gotta create bangin’ pieces. Add to all this, a few live electro dj sets at night and thousands of people attending, you’re starting to get the picture. There is more: the court of Grappa Nardini itself works as a street art expo with ill installations as well and if this is not enough, there is even a museum in the city centre that exposes next level works of a few well known elite artists of this street we walk on the daily. Being true to the street where your 59fifty caps are seen the most is New Era mission here. Our favourite brand collaborates in all this letting graff writers go off on four blank canvases creating concepts of caps how they see it, stating once again that New Era is a state of mind that can easily get on your head, without forcing you to become someone that you’re not. Music, friends, colours and a happy vibe created a Saturday that won’t be forgotten easily. If I think for a second that this post is my rap album, since I’m now at the end of it, I wanna thank the Infart collective for putting this together, New Era crew for being such a tight group of individuals and last but never least, Fabio L for being a real friend I can count on. Peep an extra gallery of how this went down here.

@keen is the new frontier of outdoor footwear. Giv

The ultimate belt when you are training to be stre

@thrashermag is doing his thing since 1981 and doi

@diadoraofficial keeps it 100% Italian when it com

A season about to change implies a new jacket and

@xgirlus develops collections that give justice to