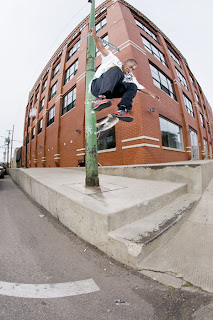 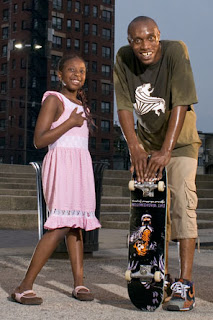 What’s better than skating? Skating with some music on. But definately, unless you’re alone, don’t skate with other people with your earplugs on. To skate rhymes with to communicate. If there is somebody that truly represents the bridge among skateboarding and hip hop music that must be Pat Washington. Meet a street skater whos style left a mark on what can be labeled technical skateboarding, whos image never changed to follow the trends, just to follow his soul. Pat soul is full of beats, rhymes and life so the outcome is that his life lead him to skate and progress while listening to true hip hop. I was intrigued by him as a kid, when everybody was studying every move coming out of the EMB crew. I’m talking about the most representative street skate posse ever in history books, the one that was used to hang in Justin Herman plaza in San Francisco, a place commonly known as Embarcadero. My connections lead me to have his number so I called Pat (aka P Dubs, if you’re really close to the man) and talked with him on the phone discussing skateboarding, music and all there is to hustle in between. It has been great, the result is online since this morning on Tackyworld and I’m really happy about it. I’m also happy because today is a hot day and even if I feel tired from the weekend, I have an exciting post to give you, my reader. Another tale of urban life, brought you by The Maxiemillion in cooperation with my homies at Tackyworld, Sigurd and Stephane. So once you’re done checking the switch varial heel in the above pic, it’s time to go and check PW interview on Tackyworld. Now!