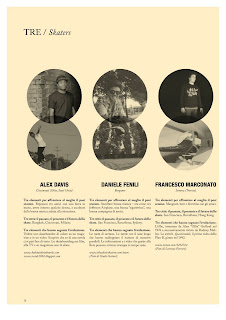 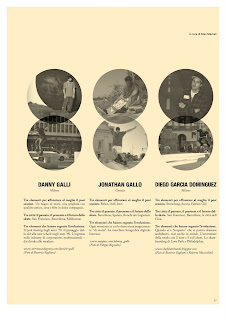 I so luv to write posts about my journalistic pieces around. Not because I can brag, but because it’s self coverage, so I could basically tell what I want but it’s a scam, it’s something of the past that I already did it. Kinda of an ex girlfriend: I still got luv for her but… it’s over. Basically what I could do here is to tell you how I got in contact with all these different individuals, in order to do a piece about three questions for each skater for Banana Magazine. Alex Davis is the freshest of them all, sorry guys but Alex gave you the distance. He’s all over the upcoming Habitat kicks catalog now, even if here he is still rocking his Adidas like he was Reverend Run. I met him through Bea, my photographer friend that took him around to skate together with the New Jersey posse that you’ve seen in one of the early posts of this blog. Daniele Fenili, loves my jokes. This thing alone means a lot to me. I luv to make him laugh. He recently joined the Lobster crew, beside getting free Es from Blue distribution megacorporation. Francesco Marconato seems to be a flatground king, he won the Es Italian Game of Skate, but I had to relate on Lobsters Jeppy to get in contact with him because… I never met him, or heard of him before. Danny Galli is a Stereo rider, beside the fact that he is on the Bastard clothing roster since day one. He amazes me everytime I see him on a deck. All terrain war machine, I do like especially his flips pivots fakie in miniramp: he open his arms less of what I would do for an axle stall. Jonathan Gallo is also getting stuff from Es like Daniele, through Blue, but he’s a more hystorical Italian rider, he’s been skating his ass off for years. Never met him in person, but I do exchange emails and I text him on his celly if it’s the case. Diego Garcia aka DGD as in Diego Garcia Dominguez is like a brother from a different mother. I see him skate forever. Clean, calm, cool, we do spent more than one night in clubs together with his posse called Chef that obviously calls me the uncle. What more can I say? Join the Banana familia!