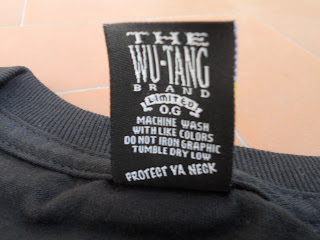 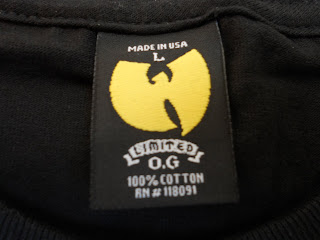 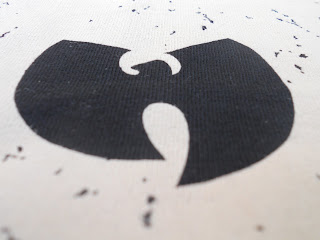 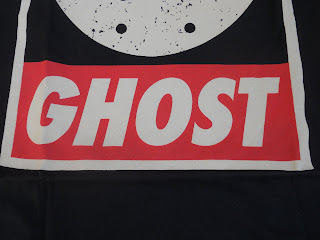 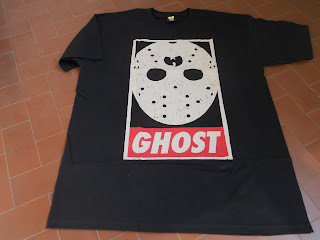 I’m an official Wu head, in case you doubt it. I’ve seen ODB live with Buddha Monk back in the Return to the 36th chamber days. I’ve seen Method twice. I’ve seen the Genius aka the Gza twice with Mathemathics spinnin. I showed my Wu Tang operator logo on the screen of my Nokia cellphone to Rza that I’ve seen two times as well, one of them with Masta Killa and Tekitha. I’m off to see Raekwon on march 23rd here in Milan and I’ve even took a flight to the UK to attend Ghostface show with his Theodore Unit homeboys.
I’m crazy about Ghostface, let it be known from the getgo. His grin, his lyrics, his flamboyant and unique sense of style, but even his name fascinates me.
Try to figure out how I felt when I saw this tee shirt. With a mask that highly reminds me those good ole days of Fresh Jive seditionary movement and of course Jason, Ghost had his tee in the last (and in the next) collection of Rocksmith Tokio, distributed in Italy by Flower Distribution. The Wu Tang form like Voltron, but Ghost is a heavyweight and this is shown even from this design. Massive like a block, strong in his eternal colours (you thought he would jump on the marine bandwagon and put out a tee in navy blue? Please…), the reference to a much more known icon in street style is evident. I heard that Ghostpard Fairy designed this (but it’s still an unofficial information and you didn’t heard it here). Only a fool would think that this is a copycat work. This is a hommage to a contemporary style where symbols swing and don’t mean nothing at the end of the day if you rule over logos. If logos rule your life, you’re just a fashion victim and you don’t deserve to read this. You wouldn’t even understand my words. If you wanna know where this tee shirt comes from, there you go. Ordered from Karmaloop, delivered to Luca I, in Orange County, it has been transported from OC to cold Berlin from Luca I to Fabio L hands. Then Fabio took it to Milan and eventually it came in my possession. I played tough above but I’m about to confess the truth: I desired this tee tee shirt so much that now that I own it, it has power over me and I have no choice but to obey.

@keen is the new frontier of outdoor footwear. Giv

The ultimate belt when you are training to be stre

@thrashermag is doing his thing since 1981 and doi

@diadoraofficial keeps it 100% Italian when it com

A season about to change implies a new jacket and

@xgirlus develops collections that give justice to